An interview with Carlie Sorosiak, the delightful author of If Birds Fly Back

Read and comment on this post for your chance to win a Query Critique of less than 500 words! 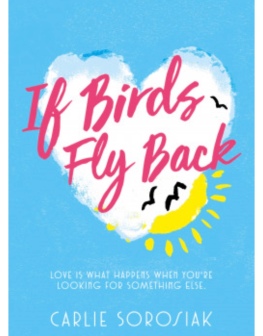 Originally, I envisioned the entire novel from Linny’s perspective . . . but Sebastian’s voice kept edging in. I found him so organic to write. I also love dual POV narratives. I’ll Give You the Sun is my favorite YA novel.

I don’t have a background in physics, no; but I’ve always been interested in science. One of the best things about writing If Birds Fly Back was the chance to research things that I never learned in school. I read loads of books to support Sebastian’s character; I found those by Professor Brian Cox most interesting and accessible. He has a really fabulous book called Human Universe, which everyone should definitely check out!

I think that as most couples age, they start to develop mannerisms and habits that mirror each other. But really I wanted to use MomandDad as this overwhelming presence that Linny views as quite stifling; making them a singular character at the onset felt appropriate to me.

I think that, for a while, Linny might view her as the antagonist; in my view, however, she’s just a mom who wants the best for her children, and who doesn’t know the most sensitive way to express it. She’s also someone who has recently experienced a serious loss (her eldest daughter ran away from home six months before the story begins), so I’ve always felt quite a bit of sympathy for her. Yes, parents should absolutely play a big role in more contemporary narratives, because they do in real life. There was absolutely no one more influential growing up than my mom, and I think that a lot of people would answer similarly.

Linny and her parents is definitely one. Linny and her missing sister, Grace (and all the turmoil and feelings of abandonment that brings) is another. I’d argue that, almost equal in importance to Linny and Sebastian’s relationship, is Sebastian’s relationship with his father, Álvaro Herrera. It’s partially what drives Sebastian as a character: how he didn’t know his father growing up, and how that’s shaped him in many ways. Álvaro has always been my favorite character, and I loved writing the bittersweet scenes between him and Sebastian.

I never thought I’d write a sequel. I quite like where I left the characters. But I’ve always thought that I might write a short story about Grace, and what really happened to her when she was on the road. I’ll possibly get to it when my TBR pile is shorter, and when I’m not on deadline for other novels!

This is always such a difficult question! I’ll admit that I don’t have a ready answer. A reader during my UK tour did suggest Zendaya for Linny, though, and I support that wholeheartedly.

My sophomore novel, Wild Blue Wonder, comes out in June 2018. It’s basically about a girl named Quinn whose family runs a summer camp (which may or may not have a sea monster), and when something awful happens at the camp, Quinn thinks it’s her fault. As she begins to heal, she starts to understand the truth about love, loss, and monsters—real and imagined. I am so, so excited for you all to read it!

I'm a reading specialist from Chicago, now living in the beauty of the Roosevelt National Forest in the Rocky Mountains of Colorado. My first book "Aliana Reaches for the Moon" features a creative and curious girl who loves science, her little brother, and her very patient parents. I'm currently writing a MG novel and several picture books with STEM elements and dogs. View more posts

This site uses Akismet to reduce spam. Learn how your comment data is processed.